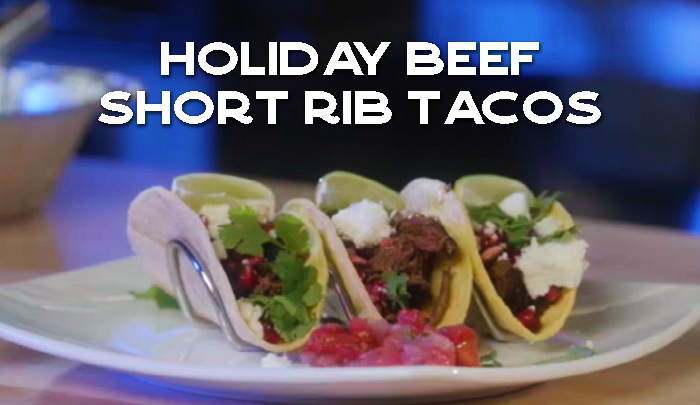 Directions:
1. Heat a cast-iron skillet over medium-high heat. Season the short ribs with kosher salt and add them to the pan. Brown for 5 or so minutes per side, undisturbed, to develop a nice crust. Some fat will render from the meat and aid in browning.

2. When the meat is well-browned remove from the pan and turn off the heat. Deglaze the pan with the pomegranate juice, scraping the bottom of the pan.

3. Place the meat and juice in a slow cooker set to low. Add the ancho chilies, cinnamon stick, and bay leaf. Put the lid on the slow cooker and braise the short ribs for 6-8 hours until the meat is tender and the bones release from the meat.

4. Turn off the heat, remove the bones, bay leaf, and cinnamon, and allow the meat to cool in the braising liquid.

6. Roughly chop the meat with the ancho chilis, mixing them together. Taste and season with salt accordingly. If needed, heat the mixture in the braising juices to serving temperature.

7. Warm your tortillas to make them soft and pliable. Plate the tacos or serve family-style, allowing guests to plate their own.