State of the Plate - Bankable Menu Strategies to Drive Traffic 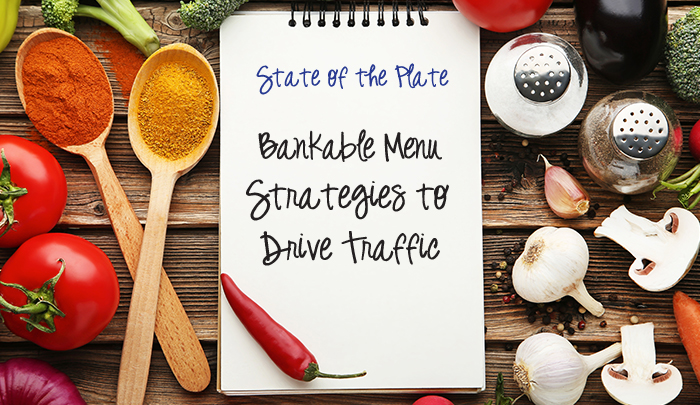 While the COVID crisis has disrupted virtually every aspect of restaurant operations, the menu has come to the forefront as a restaurateur’s primary customer-facing vehicle and chefs have stepped up their games with items that deliver comfort, craveability, and a welcome sense of fun to beleaguered consumers.

Here’s a look at what is hot and what is happening on the menu:

Produce continues to be the hottest category on the menu, boosted on the one hand by its healthful image and on the other by its ready availability and versatility. Buoyed by unbridled culinary creativity, cauliflower continues its successful run as a gluten alternative and pillar of lifestyle diets like Paleo and Whole 30. It takes the starring role in the Blackened Cauliflower & Fried Egg entrée at wildly popular Hope Breakfast Bar in St. Paul, Minn., which operates out of a rehabbed firehouse and where the spicy cauliflower gratin is served with seasoned hash browns and a fried egg.

Speaking of fun stuff, mushrooms have also been getting more play. With their dense texture, pop of umami, and easy compatibility with condiments and sides, they’re a natural substitute for animal protein, as at Saxon + Parole in New York City, which promises “meat-centric eats and plant-based deliciousness” like the hearty Pulled Portobello BBQ Sandwich served with Brussels-sprout slaw.

Chefs have long played the key role of culinary arbiters as restaurants became the point of entry for international foods and flavors, a distinct competitive advantage over supermarkets.

At Stix in San Francisco, Crispy Korean Corn Dogs are battered in sweet Korean rice flour, rolled in panko bread crumbs and crinkle-cut fries or ramen noodles, fried and then dusted with sugar.

Social media went into overdrive this summer in San Francisco, where the object of the digital uproar was the city’s newly-opened Stix. Here, Crispy Korean Corn Dogs are battered in sweet Korean rice flour, rolled in panko bread crumbs and crinkle-cut fries or ramen noodles, fried and then dusted with sugar. The resulting sweet-and-savory mashup is presented with spicy mayo or honey mustard dips.

For decades, restaurant menus have served as the inspiration for supermarket packaged goods and prepared foods. As coronavirus shuttered restaurants and caused a surge in grocery-store traffic, it created an opportunity for restaurateurs to flip the script and look to grocery for ideas.

Stay-at-home, budget-conscious consumers have rediscovered canned meats; Bloomberg reports that sales of the previously lackluster category have surged 70% of late. Chefs might take a leaf from Cargo Food Authority in Minneapolis, sibling to Hope Breakfast Bar, which has featured Minneapolis State Fair Mac, all dressed up with cavatappi, creamy Brie, fried Spam, cheese curds, and scallions topped with shredded Cheddar and panko.

Many long-suffering parents sheltering in place with their cranky offspring have turned to a tried-and-true kid-pleaser for breakfast. Kraft Heinz announced this summer that 56% of parents fed their children Kraft Mac & Cheese more often for breakfast during the shutdown. Pasta for breakfast has been hovering just around the edges of menus for some time, and last year Better Luck Tomorrow in Austin, Texas, brought it right into the spotlight with the Spaghetti Sandwich, a bountiful brunch feature comprised of burrata and a heaping serving of spaghetti on Parmesan-crusted Texas toast.

Last month The New York Times reported that “Orange is the New Snack” as it described the robust produce-aisle sales increases enjoyed by the immunity-boosting citrus fruit. Getting relatively little play on food menus, orange has sparked innovation on the beverage side. A good example is Meno, the New York City outpost of a Chinese coffee-and-tea bar, where a line of photogenic coffee juices comes in flavors like Mimosa, which is made with orange juice topped with cold coffee and garnished with lemon or lime. And Starbucks Reserve Roastery in Chicago creates a line of Chicago exclusives like the spirit-free Orange Coffee Tonic that blends cold brew coffee with chai, tonic, and lemon-orange cordial, a stylish way to ingest a little Vitamin C.