Best of the Best

Spread the Word - The Next Big Trends in Butter 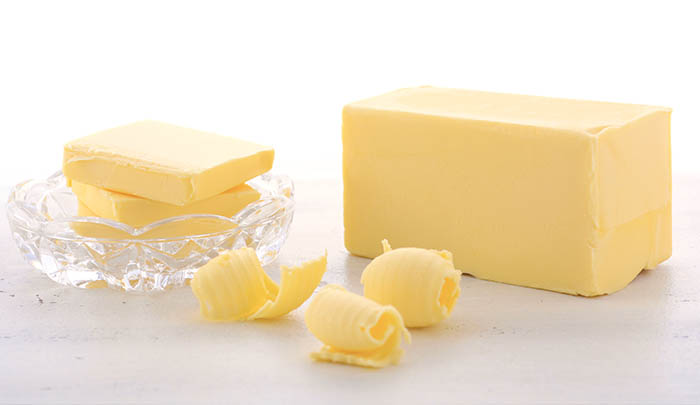 For forever, butter was basic. It came in crocks or sticks, could be melted or softened, but the intrinsic nature was what it was. Butter was a substance that was used as a spread or in cooking. The dictionary definition—“a pale yellow edible fatty substance made by churning cream”— didn’t leave a lot of room for interpretation.

But Merriam-Webster should stand by, because butter isn’t what it used to be. The old faithful will always be an essential component of the food world, of course. But new products and uses are diversifying the spreadable marketplace.

Dairy Not Required
Traditional butter is made by churning fresh cream or milk to separate the butterfat from the buttermilk. The typical makeup contains 80% fat, 15% water, and 5% protein. But while butter is traditionally made from milk, it doesn’t have to be.

Vegan butter is made free from animal-based ingredients. With a blend of palm, canola, soybean, flax, and olive oils, it mimics the physical traits and flavor profile of actual butter.

As health awareness grows, so do the numbers of consumers looking for ways to adhere to vegan lifestyles. Foodservice operators who can accommodate those needs are able to capture a competitive market segment. By using a vegan butter substitute, operators can keep butter focused dishes on the menu but produce them in ways that work for people who avoid dairy.

Another trend in butter is the elimination of it all together. In addition to vegan substitutes, creative operators are finding that other products can work in applications where butter might have traditionally been the stalwart. Avocado can be used as a substitute in recipes that mask its flavor, like decadent chocolate dishes. The creamy fruit has also given butter a run for its money as a popular toast topping. Applesauce and pumpkin puree are also standards in vegan baking, working to add flavor and moisture to baked goods, delivering in a similar way as butter.

Peanut Who?
Whole Foods Market’s recently released list of the top 10 food trends for 2020 says peanut butter’s days are numbered. Just about every nut and seed can be made into a butter. And in 2020, it’s likely that they will. First almond butter hit the scene and helped consumers to see that there was a world beyond the familiar(and beloved) peanut butter. Next came cashew and sunflower. The trend was exhilarated by the consumer desire to avoid palm oil, an ingredient whose sourcing is associated with deforestation and loss of animals like orangutans, tigers, and elephants.  As a result of that demand coupled with creative product response, operators and consumers alike will have access to everything from watermelon seed butter, to flavored variations of nut butters, to chickpea butters.

The common element is super basic: must be spreadable and creamy. Beyond that, all options are on the table—literally.

Something as small as offering nut butter instead of regular butter can make plain toast seem exciting.  Adding some of the new butter products to an existing menu item is an easy way to deliver on a food trend and make customers feel like you’re giving them something different.

With the rise of nut allergies in children and schools and airlines going nut-free to avoid health risks and lawsuits, exploring nut butter alternatives also helps create a safe space for customers who typically have to be wary of eating out.

Spreadable pleasures don’t end with butters either. Anything that can be spread with a knife and enhances the flavor or texture of food can be a butter alternative. Bacon jam, pimento cheese, tapenade, alouette cheese, confit, fruit spreads and preserves, marmite and vegemite, rillettes, pate; all prove that butter isn’t the only friend out there for bread.

Try the trend: SGC has options beyond the traditional. Ask your sales rep about the following products.